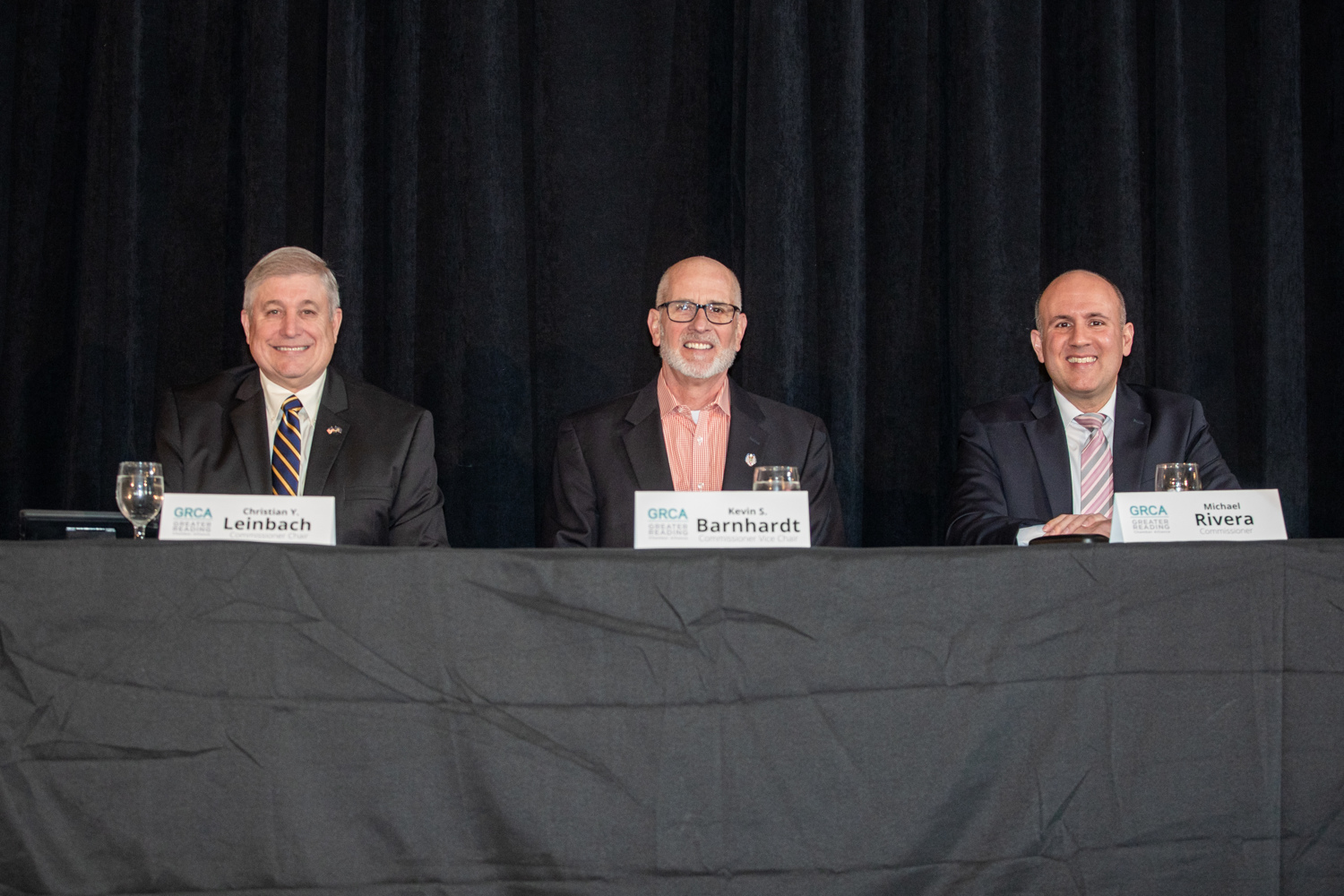 The Berks County Commissioners gave a community update about the various projects, services and challenges the County has faced in the last two years during a breakfast forum hosted by the Greater Reading Chamber Alliance (GRCA) at the Santander Performing Arts Center Friday.

Commissioners Christian Leinbach, Kevin Barnhardt and Michael Rivera told the crowd of nearly 200 business leaders and community members how thankful they were to finally be able to gather in person for the event in more than two years.  The Commissioners acknowledged that many of their projects have been successful due to the ongoing partnership with GRCA, such as the support for the agricultural community, economic development work and the distribution of the Covid Hospitality Industry Recovery Program (CHIRP).

“The relationship between the County of Berks and GRCA has never been stronger, and we appreciate all the work your leadership team does,” Leinbach said.

Barnhardt focused much of his time discussing recent developments with the County’s Office of Election Services, including the hiring of Director Paige Riegner, adding more staff positions and the implementation of electronic pollbooks during the upcoming primary. He also highlighted the County’s purchase of the former GAI Tronics facility in Mohnton to serve as a South Campus and gives the County about 110,000 square feet of space for election equipment storage, County archives and other services.

“We’ve made these investments for the improvement of elections here in Berks County,” Barnhardt said.

Barnhardt also spoke about the initial steps of the County’s correctional facility project, which restarted in January after a hiatus due to COVID-19. He stressed that the project isn’t about creating more space for cells, but for important services and updated resources to best serve the community.

“This will be the number one financial project this County has ever undertaken,” he said.  “We need to understand the need for this and the process. When built correctly, this facility will last us for at least 50 to 70 years.”

Commissioner Rivera shared about his first two years in office and the learning opportunity the COVID-19 pandemic provided for him as a new Commissioner and the County overall.

“These past few years there’s been a lot of changes that we’ve implemented at the County that will have a long-lasting positive impact on the county and County finances,” he said.

Rivera shared about the County’s overall fiscal situation, highlighting several positive factors, including no tax increases the last two years, a growing tax base and that Berks was one of only five counties in Pennsylvania to have a AAA bond rating that assures the County the lowest financing rates available. Rivera also shared about the formation of the Savings and Efficiencies Team, which meets monthly to discuss ways to reduce costs and improve operations.

“We are constantly looking at ways to save money and be more efficient in the way we operate,” he said.

Leinbach, who has been answering questions about the return of passenger rail service since his first run for office in 2007, said he is cautiously optimistic about its return to Berks County in the next five years. Following the formation of a Tri-County Committee in 2021 with Chester and Montgomery counties, all three counties are now preparing to consider the formation of the Schuylkill River Passenger Rail Authority in April.

Leinbach said creating this authority is a critical next step in the process because it will allow for negotiations with Amtrak, Norfolk Southern and SEPTA and allow for the acceptance and expending of funds. He stressed that this authority would be created with a renewal clause in three years that would allow the counties to evaluate the process and determine if it is still the best path forward.

“We’re in an exciting place,” he said.  “But please understand that this is a next step, and we are acting in a way that is fiscally responsible.”

Leinbach highlighted that the City has also been involved in the passenger rail initiative and that Mayor Eddie Moran is one of the three authority members proposed for Berks. While some may be skeptical, Leinbach said he’s aware of developers who are already looking into purchasing real estate in downtown Reading based on the prospect of passenger rail service.

“Nothing can transform the city of Reading more than the restoration of passenger rail service,” he said.

Attendees were given a handout addressing frequently asked questions about the Schuylkill River Passenger Rail Authority, such as the proposed route, who will operate it and how much will it cost.

In a light-hearted moment at the end the program, Katie Hetherington Cunfer, GRCA’s Director of Advocacy and Government Affairs, gave a “Long-Suffering Award” to Mary Buerer, who retired in January after serving as Leinbach’s executive assistant for 14 years.

“Mary’s touched so many lives, so many lives in County government and so many people that called and needed help,” he said. “And Mary talked to them. She listened.”